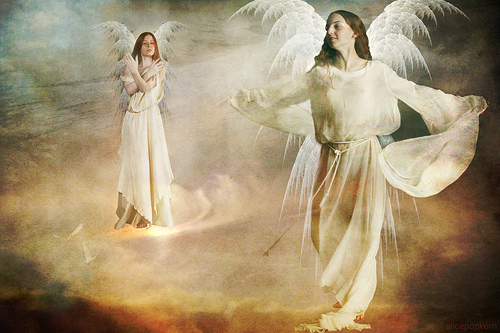 Are Angels Higher Than Man
An Overview Of Scripture

Many different people and groups throughout history have debated this issue of whether or not man is higher ranking than angels. There are several different scriptures that state that angels are higher and lower than man. However, I’d like to take you through a journey through the Bible and explain to you the conclusion that I came to in my research.

Let’s start from the beginning and to do that we need to start in the book of Genesis. Remember I’m taking all things into consideration. That being said, let’s get started in resolving where we rank against the angels

In Genesis 1:26 God said, “Let us make mankind in our image, in our likeness, so that they may rule over the fish in the sea and the birds in the sky, over the livestock and all the wild animals,[a] and over all the creatures that move along the ground.” (NIV, www.biblegateway.com). So with that, we all agree that we are made in His image and that because of this, we have free will (unlike the angels).

I’ve heard the argument that we are lower than the angels UNTIL we get to heaven. However, in Ephesians 2:5-7 the bible tells us:

5 made us alive with Christ even when we were dead in transgressions—it is by grace you have been saved. 6 And God raised us up with Christ and seated us with him in the heavenly realms in Christ Jesus, 7 in order that in the coming ages he might show the incomparable riches of his grace, expressed in his kindness to us in Christ Jesus.

That means we are heirs with Christ (Romans 8:17), and that even now, in our present bodies, we are seated in heavenly realms (Celestial & Terrestrial).

There are some things that have been made known to us while we are on this earth and knowing that you and I are made up of mind, body, and spirit – we can also know that we can travel in the spirit world as well.

I mentioned earlier that we are both Celestial and Terrestrial based on the fact that we can move in the spirit realm (Celestial) and on earth with our physical bodies (Terrestrial). This is also one of the arguments that man is lower than angels because supposedly, man cannot move in the celestial realm – according to their argument.

This is not true at all.

As I stated at the beginning of this post, man is mind (emotions & soul), body (physical), and spirit (Celestial). I know this because several times throughout the Bible, are situations that tell of going to heaven in a dream or in prayer, or in the spirit as in the cases of John, the Baptist (Revelation 4) & Paul (2 Corinthians 4:11-5:10, 12:1-10). So according to these scriptures, we are able to traverse both realms.

Man Is Lower Than Angels?

In Hebrews 2:9 But we see Jesus, who was made a little lower than the angels for the suffering of death, crowned with glory and honor; that he by the grace of God should taste death for every man.

This scripture is used all the time to “prove” that man is lower than the angels. I would say that this is correct because the Bible is always correct. However, what’s really left out is a failure in follow through. The fact that man was created lower than the angels – when Jesus came as a man (Hebrews 2:9), he placed himself alongside man, lower than the angels.  When we walk in faith, become joint heirs with Christ, are walking in obedience to God’s instruction and salvation through God’s grace, we will be lifted up with Jesus and the angels will be made below us.

Jesus has made us perfect, spotless, and higher than the angels through the price He paid on the cross!

P.P.S.  Have you followed me on Google+ yet?